Have you ever had a home renovation project go sideways? Painted yourself into a corner? Patched things up with duct tape? Maybe you’ve contemplated letting a wrecking ball finish the job. If you’re nodding to even one of these, know that, 1) you’re not alone, and 2) you’re going to enjoy the latest feature to join the GoComics collection.

Home Free is a digital comic strip that follows the wacky-yet-loveable Szabo family. Mr. Szabo, hardworking and frugal-to-a-fault, has bitten off a little more than he can chew in home improvement projects. And if the hassle of a home reno wasn’t enough, he and his wife, Mrs. Szabo, and their two kids, Milo and Julia, are displaced as a result of it, forcing them to camp out in their backyard—indefinitely.

Home Free was co-developed by our team at Andrews McMeel Universal and famed cartoonist Tom Toro, whose work includes hundreds of cartoons for The New Yorker and the children’s books, I’m Terrified of Bath Time and How to Potty Train Your Porcupine.

We caught up with Toro as Home Free makes its debut on GoComics. Learn a little more about the creator and his inspiration for the feature—and you’ll even get a sneak peek at what’s to come for the Szabo family.

How did the idea for Home Free come about?

It was a gift of the pandemic. So… thank you, Covid-19? When the lockdown first happened, we were trapped indoors with our five-year-old, desperate for ways to keep him entertained without going insane—and it occurred to me that he might be old enough to appreciate Calvin and Hobbes. So I pulled my complete collection off the bookshelf and we started reading it from page one. He fell in love instantly! And seeing his unbridled joy at discovering the comic for the first time, I rediscovered it myself. Not only that, it reawakened my passion for comic strips as an art form. The more we read it and reread it, from start to finish a dozen times (and counting), the more ideas kept leaping into my mind for a strip that I could create.

I happened to be at a point in my career when I was itching to try something new and branch out creatively. Luckily, I'd already been in discussions with Andrews McMeel about developing something with them—in fact, I'd first been in touch with an editor over a decade ago—but at long last I'd hit upon a workable idea.

I decided to draw from my personal experience growing up in a household that was constantly under construction. My fastidious and frugal parents always undertook ambitious projects that met with inevitable complications. This, combined with their love of adventure that took us on several incredibly dangerous outdoor adventures, were the ingredients that I mixed together to make Home Free.

How did you create Milo, Julia, Mr. Szabo, and Mrs. Szabo? Are there any people in real life who served as inspiration behind the characters?

Oh, it's 100 percent my family! If I showed you a photograph of my dad from 1988 you'd recognize Mr. Szabo immediately. Julia has a lot in common with my older sister, and Mrs. Szabo could swap identical horror stories with my mom. As for Milo, he's the carefree version of me that I've always wanted to be.

To create the characters, I borrowed all of the funny, quirky, or bizarre personality traits from my family members and heightened them to suit the story. In the end, the Szabos have evolved to become their own unique people, who get up to zany things that my family would never dream of doing. But the starting point was definitely the people I know best.

Which Home Free character do you think you relate to the most?

That's a toughie. It changes every day. One of the great joys of creating the comic strip is getting to shift perspective among the Szabos and experience their predicament from so many angles. Milo is out there having a blast; Julia is absolutely miserable; Mr. Szabo is irrationally optimistic; Mrs. Szabo is surviving by the skin of her teeth. I think I share a little bit of each character's outlook. (I'm a Gemini, if you're into that kind of thing.) When I sit down to draw each day, I can't wait to dive into their storylines and see what they'll do next.

Who are the readers you hope most connect with Home Free?

Is it unrealistic of me to say that I want everyone to love it?! But seriously, I think there's something in Home Free for people of all stripes. Outdoorsy types will enjoy the family's perpetual camping trip—especially Milo's love of the wild. Homebodies will enjoy the Szabo's ambitious house renovation—especially Julia's mission to get a roof over her head by any means necessary. And anyone who's been frustrated with contractors will enjoy Mr. and Mrs. Szabo's everlasting battle.

My favorite comics are the ones that you can enjoy as a kid, and then enjoy once again as an adult. I hope Home Free, with its blend of irreverent youthful antics and irreconcilable grown-up conflicts, is a comic strip that readers can connect with at any point in their lives. 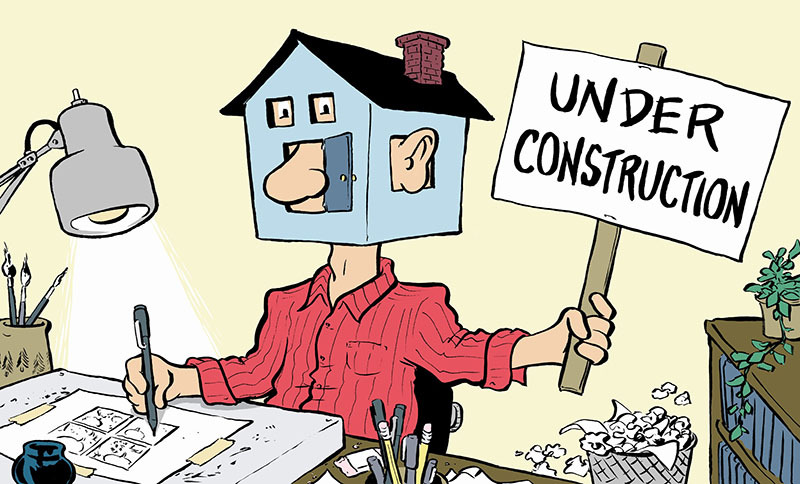 Can you tell us a sneak peek? (Be as vague as you want!)

Spoiler alert—the Szabo's home renovation will never be finished! (But is it really a spoiler if it's the entire premise of the comic strip?) Also—I'm not making any promises here—but at some point a reality TV show might document the Szabo's plight.

What’s your routine for coming up with a cartoon idea?

Maybe if I had a more reliable routine I'd come up with jokes faster! But here is one thing I do know for sure: Boredom is an essential ingredient. I let myself get bored. I put aside my cell phone. I close my laptop. I stare into space. I fight the feeling of being a bump on a log, and I try not to search for distraction or make too many cups of tea. And then, eventually, my brain will begin to entertain itself. Imagination will fill the vacuum left by external stimulation. A lot of the ideas that pop into my mind will be stupid and silly, or stolen straight from other comic strips. But a few might be interesting and new. Those are the ones that I'll sketch down and pursue.

What has been your proudest accomplishment in your career so far?

To be honest, it's unnatural for me to think of my career in terms of accomplishments, since I'm a very self-critical person who tends to focus on my failures. Which, fortunately, are multitudinous! I actually believe failure is an essential part of an artist's growth. Which is good, because it's unavoidable. It's what we spend most of our time doing. Try, and fail. Experiment, and fail. Shoot for the moon, and fail. Success is a fluke. Whereas failure is an artist's natural habitat. We're like flying fish who spend the majority of our lives swimming in obscurity, only to surface for brief, glistening moments of recognition. (That sounds a bit too florid… See? Even my metaphors are failures!) But if I had to pick my proudest accomplishment so far, this one would be right up at the top. Publishing a comic strip with Andrews McMeel is a dream come true. And hey—that's coming from a self-flagellating cynic, so you know it's sincere! 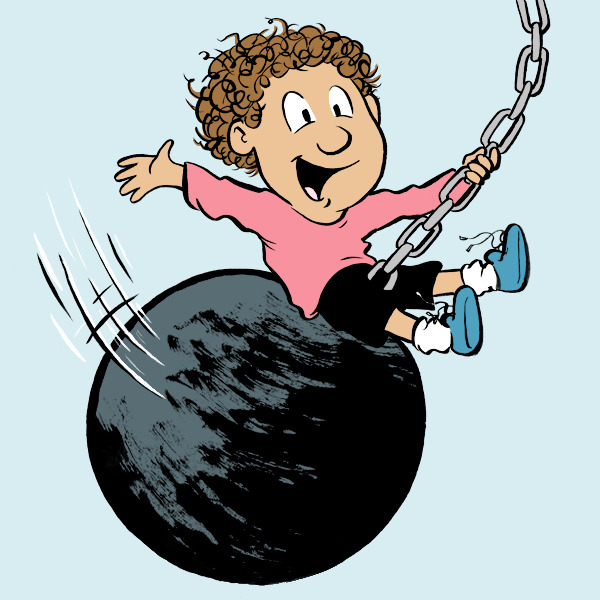 What advice do you have for aspiring cartoonists?

Make as many mistakes as humanly possible. It's in the mistakes that you'll discover your individual style. (And reread Calvin and Hobbes forever.)

What’s the last home renovation project, if any, that you personally took on?

Oh, lord! I'm less of a handyman than a handyman-child. I can do basic things like change lightbulbs, hang pictures, and stick those little felt pads on the bottom of furniture. But doing any kind of serious home renovation? No, no, no. I'll leave that up to the pros. Although, whenever my dad comes to visit, he's happiest when he has a complex construction project to work on. Just in the past few years he's built a fort from scratch in our backyard, and replaced the entire fence. I try to help him out, assuming my habitual role as novice assistant, just as I did when I was growing up. But this time, while fetching tools for him, I'll also jot down ideas for Home Free.

Keep up with the Szabo family and follow Home Free on GoComics!