New Comic "Day by Dave" Makes Every Day a Celebration

Did you know that January 8 is National Bubble Bath Party Day? Lima Bean Respect Day falls on April 20. Also, May 3 is National Lump Rug Day to those who celebrate.

"Day by Dave", which launches on GoComics this week, is a brand-new daily comic from Dave Whamond (the creator also behind "Reality Check") that celebrates all of the silly and obscure days on the calendar.

We spoke with Whamond as the feature joins GoComics. Learn more about him and how he gets strip ideas for "Day by Dave"!

You’re also the creator behind the daily panel "Reality Check". How are the two strips similar? Alternatively, how are they different?

The two strips are similar in that they are both panels and the sense of humor will be relatively the same, as I am the one writing it. But I wanted to do something a bit different than "Reality Check" so I changed the style, made it much simpler, and changed my approach a bit, like doing the entire drawing digitally, simple use of color, hand lettering instead of using my own font, etc.

"Reality Check" also has Ralph the Squirrel, a recurring little critter who I hide in the comic or who makes his daily snide comments, but in "Day by Dave", I will still have Ernie the dog and Jonesy the Cat (based on actual pets) making the odd snide comment where applicable, just not in every panel. It will mostly just be me, Dave, in the comic. And I made myself younger and skinnier, with more hair. Because I can do that. I'm the cartoonist!

How did you come up with the idea for "Day by Dave"?

This has been in the back of my mind for quite some time. I noticed people on social media or even on the local news are always saying, "Today is National Cupcake Day" or whatever silly day it is on that particular day and thought, hey, that might make a good comic where every day people could look forward to reading it, like their horoscope or doing the daily crossword. I finally sent it in to GoComics, as the universe was telling me to do it, and it was well received. Next thing you know, it's become a reality and I'm doing this interview. So, folks, if the universe is telling you to do something, do it! 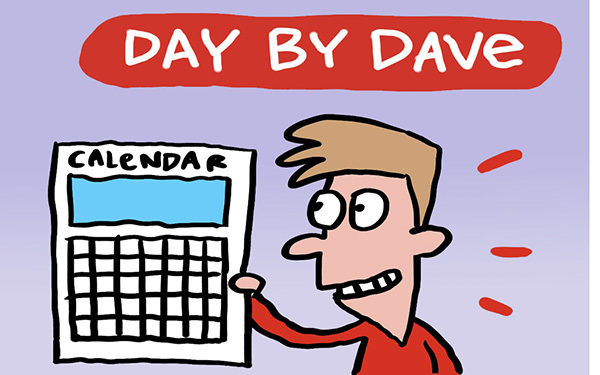 What’s your favorite holiday/national day you’ve come across in your journey in making "Day by Dave"? How about the craziest or most surprising one?

Some of the stranger national days that I came across were National Bubble Bath Party Day, Gorilla Suit Day, International Pick Your Nose Day, National Lumpy Rug Day, Lima Bean Respect Day, National Bubble Wrap Appreciation Day, National Two Different Colored Shoes Day (yep, that’s a thing). These are all ideas that are just screaming out to become cartoons. There is no shortage of material. There is pretty much a national day for EVERYTHING! Just think up a topic and Google it. You’ll see. And yes, there’s a National Google Day. Trust me. There’s even a National Trust… wait, that’s a bank. Anyway, you get the idea.

What’s your routine for coming up with a strip idea for "Day by Dave"?

I don't really have a routine established as of yet but I'm realizing how much research is involved. There are some websites that have a calendar of all the national days so I started out by visiting those. Sometimes if you are given a topic, like today is National Donut Day, it's easier to come up with an idea whereas my other panel, "Reality Check", is wide open so you can do almost any topic. However, not having an actual subject can be more difficult for some people creatively and it's more difficult to formulate a concept. But if you do have writer's block, good news: There's a National Burnout Day.

What’s something that you’ve learned in your research for producing "Day by Dave" strips?

As I mentioned, there is no shortage of websites that have a calendar of national days. Some are conflicting and only some countries celebrate certain days. This is going to be primarily a humorous panel as I want to give people a daily laugh. This means I won't always be paying tribute to some of the more serious topics. I will do this with my editorial cartoons instead. I hope people will understand when maybe I do a National Cotton Candy Day joke on December 7, when it's also Pearl Harbor Remembrance Day, I mean no disrespect. It's also National Letter Writing Day on that same day so, hey, that gag just wrote itself. I just find that most serious tribute cartoons are very similar so if I find a new way to do it that fits with the feel of the comic, I will. There are also 20-some topics for each day so I can't pay tribute to all of them.

What inspires you as a cartoonist?

Other cartoonists and their work inspire me and there are WAY too many to name here. The first time I saw a cartoon as a kid, I was hooked. I thought, "THAT'S what I want to do!" And humorists in general inspire me. I want to bring laughter to the people! Basically, I think I was put on this planet to make people laugh. That's what drives me. There's nothing I enjoy more than watching a reaction from someone you just told a joke to or seeing a comment from a reader who says "Thanks, I laughed out loud and needed that today!" So I hope "Day by Dave" will really... wait for it.... make your day.

Be sure to follow "Day by Dave" on GoComics!