"Bear with Me: It's Been a Rough Day" Is Out Now! Get To Know Creator Bob Scott

Fans of Bear with Me, we have exciting news: The feel-good comic strip has a new book, now on sale!

Bear with Me chronicles the friendship of Molly and her 800-pound pet, Bear. Molly is a boisterous and courageous tween ready to change the world. Bear, on the other hand, is the complete opposite: He is afraid of absolutely everything.

Bear with Me: (It’s Been a Rough Day), now available, is a curated collection of Molly and Bear's best moments, along with exclusive artwork and an introductory essay from creator Bob Scott.

We sat down with Scott to chat about Bear with Me: (It’s Been a Rough Day) and his comic strip that started it all. 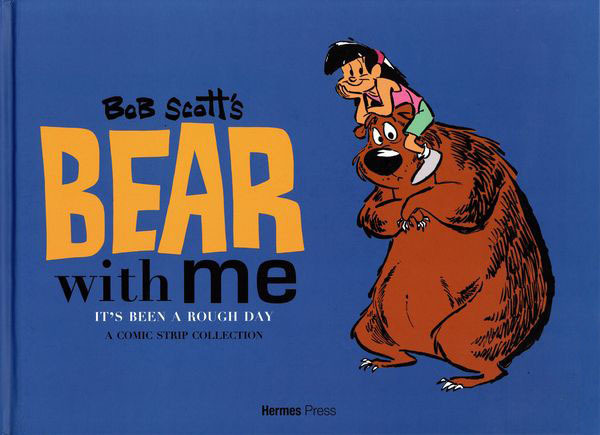 How has Bear with Me evolved since the strip started?

In the beginning, I focused on Bear and Molly, then introduced the parents. I stayed with that core group for a long time so the readers could get to know them. Now, I’ve added a bunch of new characters! Molly now has a group of friends at school, including her best friend Harper. Molly has a teacher named Ms. Buckley that occasionally has to contend with Bear when he tags along with Molly. My favorite change is that the strip can go anywhere now. Bear even ended up on a boat to Cuba in a recent storyline! That still makes me laugh; how he got on a boat to Cuba is anyone's guess.

Your strip is unique in that you have a lot of visual humor and slapstick. Cartoon violence even! How did you come about that style of humor?

My love of animation led me there naturally. I grew up watching Looney Toons, and I’ve animated on Bugs Bunny, Roger Rabbit, and Tom and Jerry cartoons. That wild slapstick comedy is in my DNA at this point. Right out of college, I worked for Jim Davis (Garfield) on the old U.S. Acres strip with Diamond Lil creator Brett Koth. We yucked it up all day long making funnier and funnier drawings, which involved a lot of slapstick and flying pies. We laughed all day long on that job.

Yeah, that’s why I ad slapstick and wild takes in Bear with Me. It makes me laugh.

Do you have a favorite story arc or moment that will be featured in Bear with Me: (It’s Been a Rough Day)?

Absolutely. The story arc of Bear’s pals from the woods converging on Molly’s house to hibernate was loads of fun to draw. I got to draw tons of bears, and Dad losing his mind about the bears sleeping all over his house. It’s always fun to draw Dad blowing a gasket. This is the second time I did a storyline with bears hibernating. It's always a hit. It's gratifying when the readers respond to the work.

What readers are you hoping to target with Bear with Me: (It’s Been a Rough Day)?

The strip is an all-ages strip. My GoComics fans tend to be older, ahem, more my age, which is cool. Fans of '50s and '60s pop culture gravitate towards it because I reference a lot of things from that era. Particularly the Beatles. When the strip is compiled into a book, I get a ton of middle grade readers, which is also cool. I’ve found kids like reading the strip as a book and older readers tend to read traditional comics on the web.

What is it about Molly and Bear’s relationship that you think makes it relatable to readers?

Because so much of the resonant emotional notes come from my own life, I think the audience can feel that reality and let themselves relate. Molly and Bear have their problems, and we all do, but by adding humor and ending the crisis with a laugh, it’s a release, a little catharsis.

What inspires you as a cartoonist?

Life. Family. Other comic strips. Movies. Music. Comedy. But down deep, I absolutely love the artform! Reading the comics I love always gets the creative juices flowing.

Do you have a routine for coming up with a cartoon idea?

I work as an animation story artist full time. My job is to come up with funny ideas all day long. Exercising that muscle makes it easier to come up with gags and ideas for the strip. I always have a note pad handy to scribble drawings and jot down half thoughts and ideas. Some turn into strips and others languish for years until I rediscover them and polish them into a useful gag. I recently did a storyline with an old lady and the first strip in that series was actually written 20 years ago! That one strip developed into a week's worth of strips.

I had another strip I was trying to get syndicated back in the '80s. I recently discovered a pile of writing in a box and revamped the gags into an entire storyline for Bear with Me. It’s kinda fun to find writing I’d forgotten about. After so much time passed, the joke was fresh to me. Plus, all my years of cartooning and board work helped me see ways to make the gag much funnier than it was when I shelved it.