The comic strip follows Wilma, a witch who hasn't quite mastered her magic yet, which gets her into some trouble. She and her family move to a cottage in the middle of the woods so she can have plenty of space to get a handle on her craft, and she meets some magical friends along the way.

We sat down with Curses! creator Chelsea Carr to celebrate the launch of the strip, which will update three times a week. Keep reading to learn more about her and her inspiration behind this spooky strip!

When and how did you discover you had a love of cartooning?

I’ve always loved comics and cartooning but I really got into drawing them in middle school. I had just moved to a new county and I was having a hard time meeting new friends. One day, this girl sat down next to me with a picture of a body she had drawn and said, “Draw a head for it.” I drew a fox’s head and she thought it was hilarious, so we made a whole series of animal characters and made comics about them. After that, I started making my own characters and storylines, and after I went to art school I decided this was something I’d love to do professionally. (My friend is now a referee for a few pro-wrestling organizations, so clearly, we were the weird kids.)

How did the idea for Curses! come about?

I started submitting cartoons to The New Yorker in 2020, and I realized a lot of my comics involved witches and other supernatural themes. They also tend to have woodsy landscapes or take place on farms. I don’t submit many about New York City because I don’t live in New York City. (I briefly lived there in college for an internship, but that was in the early 2000s for six months.) Anyway, I started wondering if I could give a story to one of these characters I draw often. Curses! started out as a story about an adult witch living with her ex-husband who she had turned into a frog, but I realized that I really enjoy making art for kids more than grown-ups, so I aged down the witch, made the frog her brother, and turned it into a story about friendship.

Can you tell me a little bit about the main characters?

Wilma is the main character. She looks about 10 years old but according to her license, she’s 600. She lives with her parents and her younger brother Edwin, who she’s turned into a frog for annoying her. Her family has recently moved to a somewhat isolated cottage in the woods because in their old neighborhood, Wilma lost her temper and turned all of the children into mice. But the biggest problem is that Wilma isn’t the best at magic, so when she loses her temper, she can’t necessarily undo what she’s done.

Fortunately, Wilma has a very loving and patient family who wants her to make friends and learn to handle her frustrations in healthy ways. She also meets a few neighbors, including her best friend Pixel, a tech-addicted fairy who’s able to research ways to help Wilma out of the trouble she gets into. 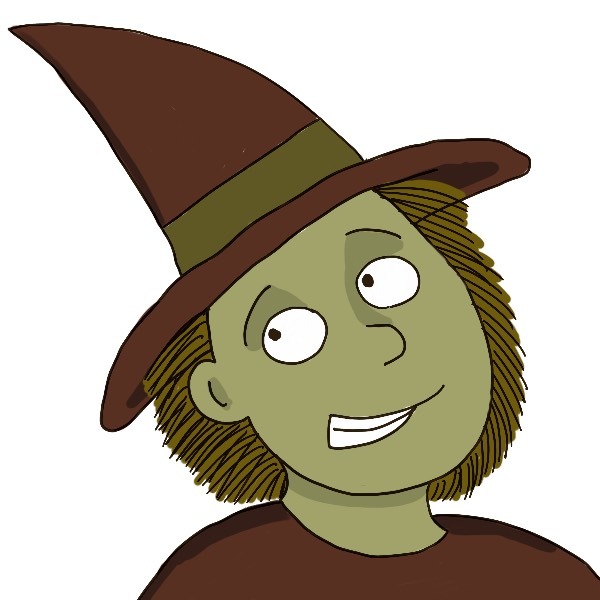 What’s your routine for coming up with a cartoon idea?

Without giving away too much, what Curses! adventure or gag are you most excited to share with readers?

I’m looking forward to Pixel showing up, because she’s SO different from Wilma and really challenges her, in a good way. I think their interactions are fun and they’re the easiest for me to write because they bounce off of each other. As far as my favorite gag though, it’s one where Wilma tells Edwin what she would have done differently when she lost her temper and turned him into a frog.

Do you have any favorite comic strips that you look to for inspiration?

I love Phoebe and her Unicorn, and when GoComics signed me, I reached out to Dana Simpson with a few questions and she was so helpful and nice, so now it’s even more my favorite comic than it was before.

I also have to mention Calvin and Hobbes, which everyone probably does, but Bill Watterson is the comic strip GOAT so I can’t leave it off.

I really love Fowl Language. I have two small kids so it’s relatable, and for a while I was doing comics about my kids. Also, Brian Gordon is super nice and another cartoonist who’s always taken time to answer any stupid cartooning questions I have.

I think everyone should read Keith Knight’s work. He did The Knight Life for GoComics and he still does other strips that you can see on his Patreon. Keith’s work has an important perspective and I think more people need to know about his work. And again, I have to give him a shout out for always supporting my work and giving me advice. I think if I had advice for new cartoonists it would be try to meet Keith Knight!

I feel like this could go on forever. I like always try to check out my fellow New Yorker cartoonists’ strips, like Bacon (Lonnie Millsap) and Junk Drawer (Ellis Rosen.) And I’m always looking forward to discovering new comics and seeing how they influence my work in the future!

When you’re not sketching Curses!, what are you doing?

I garden, and I just learned how to crochet last year so I’ve been having fun with that. I take all kinds of crafting classes: For example, I just took a couple of basket weaving classes. Basically, if your 80 year-old grandma is into it, I probably am, too.

I do a lot of nature-hike stuff with my kids; I stay home with them full-time but next year I’m returning to my regular job, which is teaching art. I’m looking forward to that because I like being in a classroom.

Are you dressing up for Halloween this year? If so, what’s your costume?

Maybe! My kids are going as Ash Ketchum and Pikachu, so I think I should go as something to accompany them. Snorlax, maybe? My husband and I actually got married on Halloween! That year we were a zombie bride and groom. If we have time to go out to dinner this year I’ll have to wear the Snorlax costume.

Keep up with this witchy adventure by following Curses! on GoComics!