Congratulations to creator Mike Baldwin on the 25th anniversary of Cornered!

If you've ever been in a situation where you've been cornered, you know how awkward and uncomfortable it can be. Which, in turn, can make us have odd or funny reactions. That's what Baldwin's iconic comic strip is all about: How people react to being cornered—and aim to be taken seriously while doing it.

The strip made its grand debut a quarter-century ago on Sept. 1, 1997, and in honor of the anniversary, Baldwin took some time to participate in a Q&A. Get to know him a little better and learn how Cornered has evolved—and stayed the same—throughout the years.

What do you think it is about Cornered that has made it so popular with readers for so long?

I think just hanging in there covers the "so long" part, but given the state of the newspaper industry these days, I do feel fortunate to have been able to ride it out this long. I just try to do cartoons that amuse myself and my wife. I've never given much thought to what others will think of them. Don't get me wrong, I love hearing from readers who enjoy a cartoon, or even from folks who have been offended by one, but I don't create work with the intention of pleasing anyone. I do understand the basic guidelines for what's OK in a family newspaper and don't go out of my way to offend readers or editors—or the weak or powerless—and, for the most part, I think that works. Generally speaking, the characters in Cornered play it straight and are not trying to be funny; it's the situation they find themselves in that is funny or amusing. With Cornered, there is no story line or regularly appearing characters, so each panel has to stand on its own. That's both a great excuse to do whatever I please and also a curse in that it's tougher to gain a daily audience. People don't check in to see what happens next, so hopefully they do check in to be amused.

What has been your favorite part about creating this strip and these characters for 25 years?

I've always enjoyed art and humor and doing Cornered has allowed me to do a deep dive—really throw myself into it—over the years. No other work I've done has been so challenging or creatively rewarding. It truly has been a labor of love—a passion project. I am truly grateful to AMU for the opportunity. That's the best part. That, and working from home. Except for the last two years when almost everyone had to work from home. That kind of freaked me out and made me take a closer look at my locked down lifestyle and has made me feel a little antsy. I suppose the pandemic gave everyone a taste of that freedom. Good luck at putting that genie back in the bottle. Not sure what the new normal will bring.

Do you have a favorite strip that you’ve created? If yes, what one?

My favorite is your favorite. The cartoon that still makes you smile even after you've seen it many times. About a year ago I heard from a reader who had clipped one out of her newspaper and taped it to her computer and wanted to know how to get a copy because the original was falling apart. It took some digging, but I found it. The cartoon ran Monday, Feb. 17, 1997 (six months before I signed on with AMU over 25 years ago) and she said it still makes her laugh every time she looks at it. Those are my favorites. Although, it would have been nice to think I'd done one just a little more recently that she liked as much! The cartoon she wanted wasn't a personal favorite of mine, but because it was hers, from that day, it was mine too. I love the paradox. I don't know if any two readers would agree on which cartoon(s) fit into that category, but I hope over the last 25 years I've created lots of reader favorites. That's something that I love about cartooning—that the reader plays such an active part in how the cartoon is experienced. Their world view/personal experiences and even how their day is going can play a big part in how the work is experienced on any given day.

For what it's worth, on my GoComics page I picked a few of my personal favorites: Catch Up With Cornered.

If you launched Cornered today, what would you do differently?

When AMU took over the syndication of Cornered, it had already been running a year and a half (self-syndicated) in about 10 dailies at the Southam chain in Canada. So, both the sales kit and the launch were just a continuation of the cartoons I had scheduled to run. If I had to do it again, I would have stacked the deck a little, maybe go back over the first 18 months and pick the best-of to showcase for the first year. Maybe it wouldn't have made any difference. After all, my idea and editors' ideas of what is funny might not be the same thing, but anything I could've done to build an audience and make the syndicate’s sales team's job easier would've made sense. At the time, I remember thinking it was more honest to just put out what I had scheduled to run, but that was before I realized you only get one shot in front of a newspaper editor.

What is one thing readers don’t know about Cornered?

Cornered was the first daily newspaper cartoon that was offered in full color and colored by the cartoonist offered by a major syndicate. I'm 100-percent absolutely pretty sure that's true.

The reason is, I believed (and still do) that color makes the cartoon seem larger (on the continually shrinking comics page) and easier to read, and thus offers greater value to newspapers and their readers. Of course, now every cartoon is offered in color, but that wasn't the case back in the olden days. 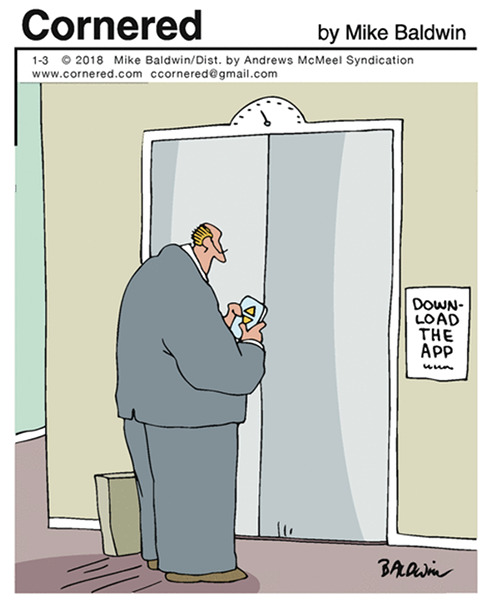 What’s the best compliment you’ve ever received about Cornered?

I've been told I have one of the most consistently funny cartoons out there by a number of cartoonists whose work I really admire. Maybe that's just something cartoonists are supposed to say to each other, but it's always nice to hear and means a lot to me.

What do you hope to see in years to come with Cornered?

Over the last year or so I've doubled down on the art, specifically by hand coloring each panel. I think the flat color works fine in newspapers, but "fleshing them out'' really makes the art pop on the web version and prints very well too, even at the small size it runs in the newspaper I see it in. It means I spend about 30-40 extra hours on each month's batch, but I think it's worth it. The process is very satisfying and by hand coloring each cartoon (using Photoshop, of course) the artwork seems more spontaneous, personal, and unique  (to me anyway). I hope to continue down this path and see where it leads.

Is there anything else you would like to add about the strip, or about your life as a cartoonist?

I'll answer that question with a true story that sums up the paradox of cartooning for me.

A few years after Cornered had been running in the newspaper, I was at a family get-together where a cousin came over and asked, "How do you come up with so many clever ideas, day after day, week after week, month after month, year after year? I could never do that." I gave her the short answer, something like, drink gallons of coffee, lock myself in a room for hours with nothing but a scribbled list of thoughts and bits of verbiage to use as stepping stones, and wait for divine intervention. When nothing comes, I sketch something out and see if that takes me anywhere and wait some more, and scribble some more and hope to hell something fresh bubbles up before the sun does. In other words, I had no idea. To which she replied, "So, is the cartoon all you do?"

Be sure to check out Cornered on GoComics!