We are excited to announce the syndication of Crabgrass by Tauhid Bondia! Starting Monday, June 27, Crabgrass will be printed in daily newspapers nationwide.

The comic strip, which got its start in 2019, follows the adventures of middle-school best friends Miles and Kevin. The two are quite the opposite: Miles a careful, thoughtful people-pleaser and Kevin a thrill-seeker who’s usually up to no good. It’s Kevin’s and Miles’ inseparable friendship that gets them into equal parts adventure and mischief throughout the years.

We caught up with Bondia to chat about Crabgrass’ newspaper debut. 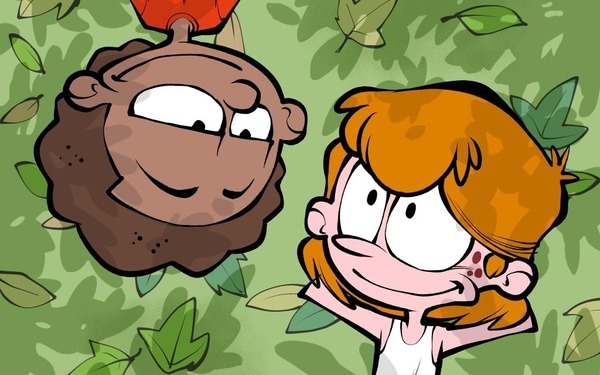 We are so excited about the Crabgrass syndication launch! How are you feeling about getting your feature in front of a new audience?

Ecstatic! All I’ve ever wanted was to share my comics with as many people as possible. Maybe I can even help inspire future cartoonists one day.

Your book, Crabgrass: Comic Adventures, is set to release on September 20 (and was recently given a glowing review by Kirkus!). What can readers look forward to in the book?

I think the overall theme of Crabgrass is one of the enduring nature of childhood friendship and I really wanted the book to represent that. It’s my hope that readers will see themselves and their own friendship in Kevin and Miles.

You mentioned that you would spend many hours at the local library reading comic strip collections when you were a young, budding artist. What were a few of your favorite comics?

Garfield is largely responsible for my introduction to comic strips. I must have read a dozen collections of that comic in a summer. But Bill Watterson’s Calvin and Hobbes is what inspired me to want to make comic strips one day. His use of lines and expressions really appealed to the artist in me. And his writing still hasn’t found its equal in the funny pages in my opinion.

Which Crabgrass character do you relate to the most and why?

A couple of years ago I would definitely have said Miles. He was initially based on me as a child. But over time I’ve come to identify more with different parts of all the characters. I was a bad student like Kevin. I’m a goofball father like Gene (Miles’ dad). I can have a stubborn streak like Donna (Miles’ mom). I’m all over the strip I think.

What’s been your favorite Crabgrass story arc or gag?

I really like the one where Miles gets obsessed with finding out how his dad performed a magic trick.

Do you ever get into creative ruts? If so, how do you bust out of them?

What advice do you have for aspiring cartoonists?

The only two pieces of advice I have that apply to everyone is:

1) Never stop drawing. It sounds simple but it’s important. Once you deprioritize your art, a short break can balloon on you.

2) Share your art with as many people as you can. Post it on all the platforms. If you’re always drawing and always sharing your work, two things happen: You keep getting better and it's easy for opportunity to find you.

Are there any comics that you read every day? If so, which ones?

I read less and less comics these days. I have a habit of thinking I had a great idea for a strip and then realizing I read it somewhere else. To cut down the chances of that I just don’t read many comics. However, I do love Wallace the Brave, Phoebe and her Unicorn, and I still read Calvin and Hobbes whenever it’s in front of me.

Are there any sneak peeks on upcoming adventures of Miles and Kevin you can share with us?

Sure. In the first major arc after the newspaper launch Kevin gets lice and Miles shaves his own head in solidarity. That’s all I’ll say, but that’s just the beginning.

Lastly, how will you celebrate on June 27?

I’m taking the week off. We’ll probably go on a road trip to pick up a few copies of the nearest paper featuring the comic. Also I think my wife is planning something (because I hate making a big deal out of stuff). But mostly, I’m just going to stop dead in my tracks and scream, “I’M A SYNDICATED CARTOONIST!” inside my head about once an hour throughout the day.

Catch up on the adventures of Miles and Kevin by exploring Crabgrass on GoComics.