We are thrilled to welcome cartoonist Mike Peters and his daily comic strip "Mother Goose and Grimm" to GoComics!

The witty and light-hearted feature follows titular characters Grimmy, a disorderly bulldog, and his quirky caretaker, Mother Goose. Both characters' names are fitting, seeing as Peters often incorporates fairy tale elements and characters into the strip's storyline. (Grimms' Fairy Tales and the Mother Goose nursery rhyme! Get it?)

"Mother Goose and Grimm" originated in 1984 and, in its lifespan, has graced hundreds of newspapers worldwide, books, greeting cards, and even an animated TV series.

"I had always drawn dogs, and I had often incorporated fairy tales into my editorial cartoons," Peters says. "Dogs are inherently funny, and they know it. I also had a bunch of weird ideas that don’t fit any categories other than funny. So I combined them all under the umbrella of 'Mother Goose'."

One thing that makes Grimmy relatable is that he is, in fact, a real dog—and acts like it. That's made evident in the strip's storylines, whether he's chasing cars, eating out of trash bins, or drinking out of the toilet. The character Mother Goose is loosely based on Peters' mom, who was a telvision personality in St. Louis, and his wife, Marian, "who basically keeps me out of jail," he jokes. 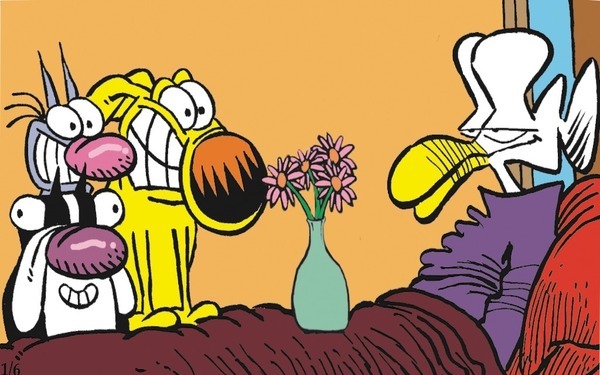 Over time, Peters has introduced many characters in "Mother Goose and Grimm" (including fairy tale names like Snow White and Rapunzel), and he looks forward to bringing back old characters as well as adding new ones. "I also continue to add humans based on some of my favorite people: my mailman and my hair stylist, for instance," he says. He also says that his favorite comic gags are the strips that require little-to-no conversation and speak for themselves. 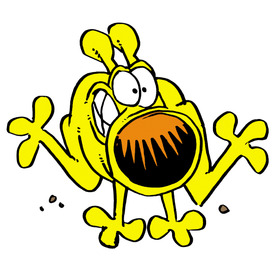 In the end, Peters looks forward to continuing the journey of Grimmy and Mother Goose and sharing with GoComics readers. "I hope everyone gets a laugh," he says. "We all need more and more of them."