Last Kiss celebrates 10 years on GoComics Saturday! We had to get creator John Lustig's thoughts on this momentous anniversary, the story of how the comic started, how he's shaped his writing through the 'romance comic' set-up, and — last but not least — his all-time favorite GoComics commenters ...

GoComics: How does it feel to celebrate 10 years on the illustrious GoComics site?

John Lustig: To answer that in the understated and dignified language of comics, I must say … 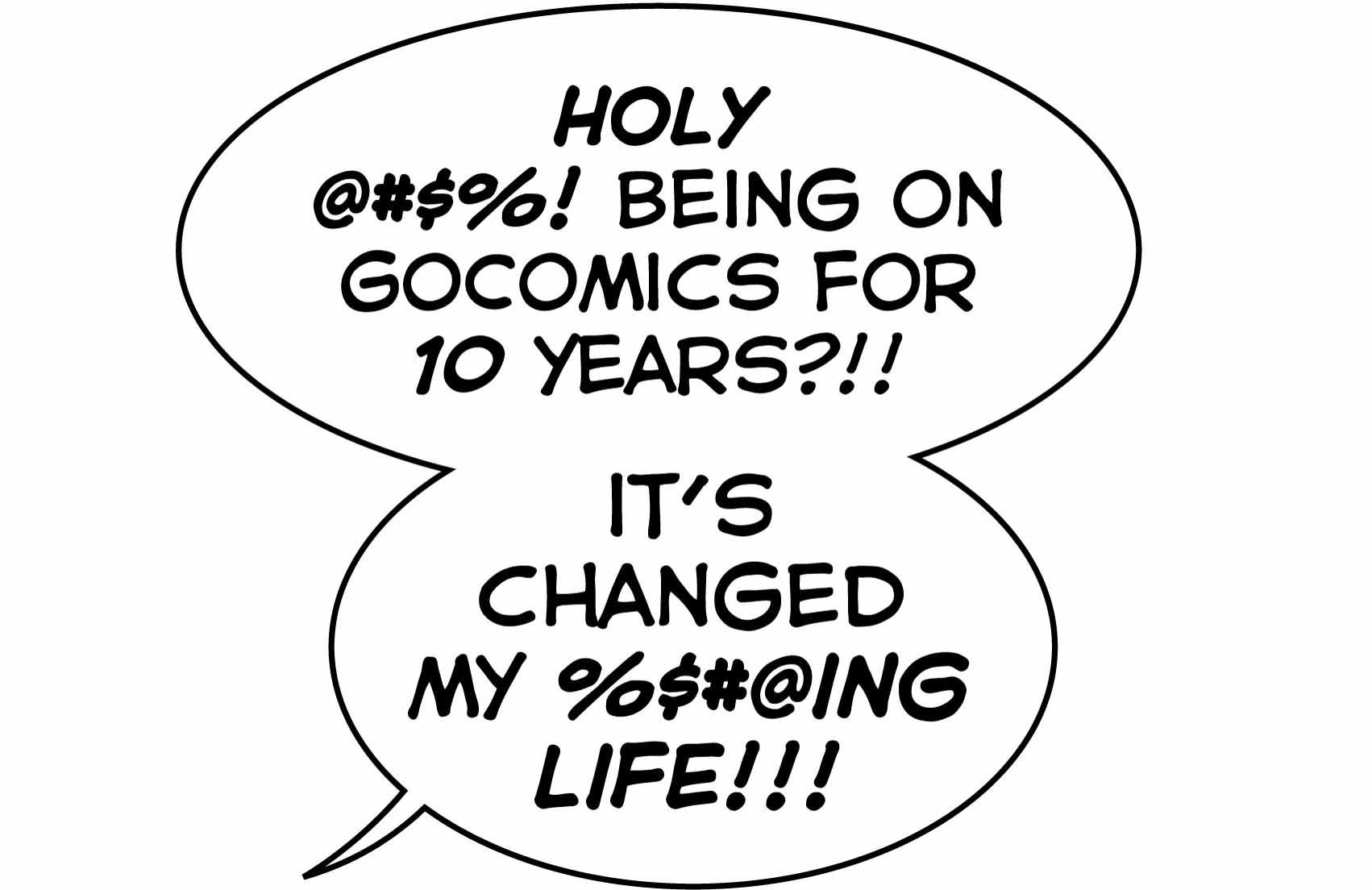 (I sincerely hope no one was offended by my %$#@ing language.)

Seriously, it’s been great. When I started here, I had no idea how much larger, more diverse and enthusiastic my audience was going to become. It didn’t happen overnight, but looking back 10 years, I can see how much the series evolved — partially in response to my readers, but also because I’ve had been so much freedom to experiment … and in some pretty outrageous ways.

GoComics: Tell us a little bit about the history of Last Kiss before it was picked up by GoComics.

John Lustig: The idea for the series began way back in 1987 when I bought the publishing rights to an old romance comic book series, First Kiss. Charlton Comics was going out of business and I bought First Kiss with the vague idea that I might re-write some of the dialog and put the old art to new use.

However, I bought First Kiss sight unseen — for $400 for the entire 40-issue series — primarily because it was the most material I could get for the least amount of money. I was gambling that there’d be something in all those hundreds of pages that I could use.

But I wasn’t really familiar with romance comics then — much less Charlton romance comics — and I was shocked when I received the art. Unlike superhero comics that were filled with action scenes, the First Kiss comics were mostly just people talking, kissing or crying. So, I shelved my plans and concentrated on writing Donald Duck and Uncle Scrooge comics for Disney.

It took me several years to get back to the Charlton material. But I finally realized how perfect they were for humor. Why? Because I could have the characters say anything I wanted. Not having fights or other action scenes actually freed me up.

So I wrote some very silly gags and showed them to Don and Maggie Thompson at Comics Buyer’s Guide (at that time, the most widely read and longest running U.S. publication about comics). They loved the gags. By 2000, Last Kiss was appearing in every issue of CBG and continued to do so until CBG folded in 2013.

Fortunately for me, that wasn’t the end of Last Kiss. Four years before, I launched a new version of the series specifically for GoComics. So I still had a home for my humor.

GoComics: Sticking to a set single panel and 'romance'-themed comics could get old, but your writing remains really fresh and snappy. What are your thoughts on how the format helps instead of hinders your voice?

John Lustig: Thanks. Keeping Last Kiss fresh — and myself entertained — is crucial.

Last Kiss usually focuses on romance and relationships. And from there, you’re only a passionate kiss away from the subject of sex.

(Imagine my shock to learn that GoComics readers like jokes about sex!) Honestly, I’m never going to run out of things to say about relationships and sex. If I did, I shouldn’t be in this business.

GoComics: What have been your favorite reader interactions on GoComics? Do you ever comment, or read others' comments?

John Lustig: I read all comments and when I can think of something interesting to say, I comment back. I’ve had some lovely — and wildly funny — conversations with readers. And some have changed Last Kiss … in unexpected ways.

For instance, several years ago, a reader (“LordDogmore”) suggested that one of my lusty female characters was a member of the singing group “The Von Tramp” family. The name resonated with other GoComics readers. So every once in a while a new tramp — uh, I mean Von Tramp— shows up in Last Kiss.

We loved catching up with John before his ten year anniversary on GoComics on Saturday, January 19th! Be sure to check out a new comics collection celebrating the 10th anniversary of Last Kiss — John's shares his ten all-time favorite comics and his inspiration for them!